Showing posts from September, 2017
Show all

#NewRelease #KindleUnlimited ☛ Dirty Forever by Author Cassie-Ann L. Miller is #LIVE #OneClick 👉US: http://amzn.to/2yNTpPR 👉UK: amazon.co.uk/dp/B07594JGSF 👉CA: amazon.ca/dp/B07594JGSF 👉AU: amazon.com.au/dp/B07594JGSF #Goodreads ➾ http://bit.ly/2fzooum 📚 #Excerpt 📚 Frankly, I'm nervous. As much as I love him and I wish that we could be together, I'm a realist. We can't fix this so we need set clear rules for this juvenile game that we're playing. But knowing Daniel Trotten, he's going to put up a fight. I brace myself for it as my eyes scan his text message. Daniel: I’m coming over My hands freeze. I feel fireworks in my belly and a little smile inching across my lips. I'm going to need some steel in my spine to go up against this charming bastard. Grace: Why? Daniel: We need to talk Grace: Am I supposed to believe that you’re coming over here to JUST talk? Daniel: Never said I want to JUST talk. Daniel: That would be a boldface lie. Dan
Post a Comment
Read more

Title: Imogen: A Dark Romance Books 5-8 Author: R.B. O'Brien Genre: Erotic Romance/Dystopian Release Date: September 30, 2017   “Do not cry. God. You look so god-damned beautiful. You knew this would never be anything. I took you, Imogen. Think about that, would you? I captured you. Enslaved you. Tormented you. Threatened you. Every day would be a reminder of that past.” At last, the conclusion to the story of Imogen, a young maiden taken by her enemy on her wedding night by the mysterious and powerful Erik, is complete in this four-volume set, Tattered, Tormented, Threatened, and Tethered. Questions are answered, pasts are finally revealed, and as the war that brought this couple together comes to an end, can Imogen forgive Erik for what he is about to do? Filled with mixed emotions about her undeniable feelings for her captor, Imogen struggles between hopes of freedom with the reality of first staying safe. As she learns the stories and legends of h
Post a Comment
Read more

Title: Selfless Series: Selfish #3 Author: Shantel Tessier Genre: Romance Release Date: September 30, 2017 Blurb ASHLYN   I went against all I believed in and fell in love with what should have been a one-night stand! I fought it, tried to make up rules to prevent the inevitable, but somehow, he knew all along. He understood what I wanted and was willing to comply. I was the one who took him for granted. I was the one who made him walk away. And now, he’s gone and I’m left with nothing but my thoughts and regrets. He was never supposed to be my happily ever after. But my favorite love story ends in tragedy, so why wouldn’t mine? RYDER   I played the white knight, doing what every woman dreams of to win her over, yet it still got me nowhere! But what did I expect? I wasn’t the man she wanted! Nothing I could have done would have landed me the girl. I guess love is funny that way. One minute, you think you have the girl, and the next, yo
Post a Comment
Read more 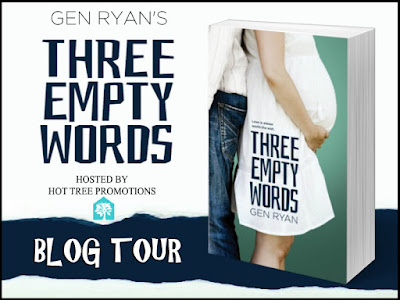 Author: Gen Ryan Title: Three Empty Words Genre: Contemporary Romantic Comedy Release Date: September 9, 2017 Publisher: Hot Tree Publishing Cover Designer: Claire Smith  AVAILABLE NOW  Amazon:  http://amzn.to/2kaenVO All others:  books2read.com/empty-words Melanie Smith has spent her entire life waiting for her happy ever after. For a moment there, everything is hunky-dory until her boyfriend falls in love with another man. Trying to move on, she makes every effort to find "the one." Watching everyone around her find love, leaving her knee-deep in spinster status, Melanie decides on a new path: become a surrogate for her ex-turned-best friend. She doesn't bargain on a two-for-one deal: a baby for bestie... and a new man. Join Melanie on her journey as she navigates the highs and lows, the cravings and confusion of love and trying to find meaning in those three empty words. (Please add your review her
Post a Comment
Read more

Buy Link books2read.com/FindingPeace Blurb Abby Knight's promising start as a family physician is cut short by an abusive relationship. She leaves a painful past behind and trades the hustle and bustle of city living for the more sedate pace of country life. She's excited to join her Uncle's family practice in Peace, Montana, and looks forward to many years working by his side. As for relationships? Abby's not interested. The only thing she cares about is establishing her medical practice and maybe finding a little bit of peace along the way. However, a freak blizzard in May, quirky llamas, and a determined Montana rancher have other plans in mind. Teasers Excerpt "It’s beautiful here.” Abby fought against the urge to spin in a circle, arms stretched wide, taking in the scene. Drake’s hard gaze locked on her face. “Beyond gorgeous.” Her cheeks heated. He’d hadn’t been talking about the farm. “Come.” He turned toward the barn. She followed
1 comment
Read more

Title: Defying Gravity Series: Healing Hearts #2 Author: Laura Farr Genre: Contemporary Romance Release Date: September 29, 2017 Blurb Savannah Parker is miserable. The reason: Josh Miller, her brother’s best friend. Devastated by the unrequited love she has for Josh, she has no choice but to sit back and watch him play the field, her heart breaking a little more each time she sees him. In an attempt to forget about Josh and move on, she distances herself from those who love her. Josh is never far from her thoughts though. In a desperate attempt to feel something for someone and fill the void, she makes a reckless choice – one that will change her life forever. Once her secret is revealed, relationships are threatened, and Savannah stands to lose those closest to her. When she needs someone the most, Josh proves to be her greatest support, and soon the lines of friendship become blurred. When she confronts him about his feelings for her, he revea
Post a Comment
Read more
More posts