“Would you like something to drink, Hollis?”
“No, thank you.”
He looked completely uncomfortable standing in my kitchen, so of course, I needed to make it worse. I tilted my head. “Did you touch any?”
“What?”
“My panties. Did you touch any while you were in the bathroom?”
He tugged at the collar of his polo and looked down the hall. “Where did she go? We need to get back on the road.”
Oh my God!
I’d been kidding around. But…holy shit…he had! I covered my mouth and cracked up. “You did, didn’t you! You perv!”
Hollis walked down the hall. “Hailey…let’s get going.”
I couldn’t get the smile off my face. Something about the thought of Hollis touching my underwear amused the hell out of me. I wished Hailey wasn’t around so I could ask him if he’d smelled them, too. That thought actually made me snort.
Hollis came back to the kitchen. His face was stern. “We’ll see you on Monday.”
I walked them to the door. Hailey surprised me with a hug. “Your art stuff is awesome.”
“Thank you, sweetheart.”
I grinned at Hollis, who was impatiently holding the door open for his niece. “Your uncle thinks my stuff is awesome, too.” 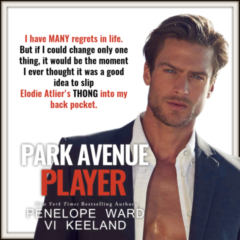 Then the fender bender happened.

The guy I collided with drove an expensive car and was drop-dead gorgeous. Too bad he was also a total jerk. We argued over whose fault it was and any other thing that came out of his condescending mouth.
Eventually, the police came and we went our separate ways. The insurance companies would have to figure things out. I had a job interview to get to anyway—one I was excited about.

Though that excitement changed to disappointment the moment the person interviewing me walked in. The guy from the accident.

Yeah, so I didn’t get the position.

The problem was, I really wanted it. No, I needed it. Anything to get me out of my current career and back into working with kids.

So, even though Hollis LaCroix was as intimidating as he was devastatingly handsome, I went back to see him and begged for a chance.

To my surprise, he gave me a shot taking care of his troubled niece.

At least my attraction to him wouldn’t be able to go anywhere. I wasn’t about to jeopardize my job or the strong bond Hailey and I formed.

But resisting the magnetic pull between us wasn’t that simple. (Then there was our little underwear game—don’t ask.)

We continued to flirt without crossing the line—until it finally happened.
This is the part of the story where we fall in love and live happily ever after, right?

Ours was one I didn’t see coming. 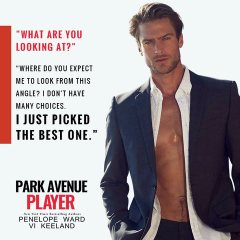 She grew up in Boston with five older brothers and spent most of her twenties as a television news anchor. Penelope resides in Rhode Island with her husband, son, and beautiful daughter with autism.

With over two million books sold, she is a 21-time New York Times bestseller and the author of over twenty novels. Her books have been translated into over a dozen languages and can be found in bookstores around the world.
PENELOPE’S SOCIAL MEDIA LINKS:

VI KEELAND
Vi Keeland is a #1 New York Times, #1 Wall Street Journal, and USA Today Bestselling author.   With millions of books sold, her titles have appeared in over a hundred Bestseller lists and are currently translated in twenty-five languages. She resides in New York with her husband and their three children where she is living out her own happily ever after with the boy she met at age six.