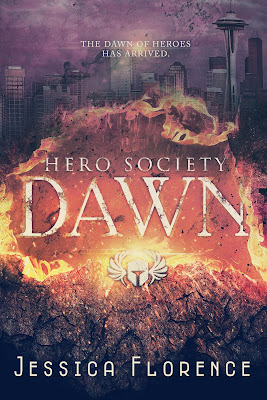 
Draco has lived long and felt the pain of loss more than anyone in one lifetime could imagine. Immortality was given to him as a gift, a gift that failed him and turned him into a shell of the man that has nothing left but to wait out the end of existence alone.
Until her.
Rose is an empath who sees more than who Draco is supposed to be: she sees him, and what they could be.
Together, they will begin the search for others with extraordinary powers, to stop a war that’s been brewing for over a millennia.
The journey is only beginning, and an unnamed enemy has started to make his mark on their world.
The dawn of heroes has finally arrived.
Only time will tell if it’s too late to defeat the upcoming darkness of night that now descends upon all of mankind.
❋❋❋❋❋

EXCERPT
Her brown eyes stared up from the bed.
Our bed.
Now it was her death bed.
“Cassandra.” My voice was broken, because there was nothing I could do. She was dying.
“It’s my time, Draco.” She smiled sweetly at me. She was always the kindest person I knew; it was why I married her in the first place.
“I wish I could go with you, love.” Tears ran down my cheeks, and I wished with all my heart that I could follow her into death’s embrace.
“We knew this was going to happen; you promised me.”  Her eyes began to water just as the house shook from war going on outside.  I didn’t care if they destroyed each other outside. My world was currently exploding before my eyes now.
“You promised,” she repeated, and I shook my head. I didn’t want to keep my promise. When we decided to get married, she knew all my secrets, and took me as I was. We promised each other that age didn’t matter, and when it was time for her to die, I would continue on with our memories of love.
“Remember me, Draco.” Her breaths were slowing, and I knew she didn’t have much longer.
“Always, Cass.”  I smiled and let the tears flow freely. She smiled once more, and then her eyes closed.
I wrapped my fingers around hers, and my head fell to her chest, hoping to hear the last beat of her heart.
The final thump echoed through my head, and I couldn’t help the strangled cry that escaped my throat. I cradled her in my arms, holding her tightly as I let out all the pain that I couldn’t let her see.
This was why I didn’t fall in love.
This was why I didn’t get close to people.
The pain of loss. I’d felt so much more pain than anyone should in one lifetime.
I felt the house begin to vibrate.
“Goodbye, love.” I closed my eyes as the house exploded, and everything inside of it was turned to ash.
My sweet Cassandra was no more. Gone were the pictures of us in those little albums she liked to put together of our adventures.  Everything was just gone.
Except me.
Forced to live for eternity, and never die.